If you said to yes to one or all of those questions, then I have a special treat for you! One of my friends released her novel into the world and it looks and sounds amazing.

Ready to celebrate with me in beautiful books and stories releasing?

I hope so because Rebecca is stopping by on her exciting launch day to chat about her novel, Divine Summons! 😀

When Captain Vinyanel Ecleriast, an officer in the elven cavalry, narrowly escapes a devastating scouting mission, he discovers a new calling to establish and command an airborne unit of mounted warriors. Joined by an enigmatic half-elven prophetess and a silver dragon, Vinyanel struggles to come to grips with this responsibility, while mourning the recent loss of his unit and only friends.

A subversive plot emerges within the walls of the elven capital city, one that threatens to provide the elves’ enemies with hellish destructive power. Only with the prophetess’s help will Vinyanel unravel the mystery behind the enemy’s plans—that is, if the two of them can stop bickering long enough to work together. Vinyanel barrels headlong into territory where he will need more than a sword and shield to prevail. Only if he can look beyond himself for the strength to defeat his enemies will he survive to answer his divine summons.

– Hi Becky! I am SO excited to be chatting with you today! For those who don’t know you, can you share three words to describe yourself?

– Haha! That’s awesome! You are such an amazing artist, and I noticed on your website that you mentioned you make “character art.” Is this for your books or do you also sometimes draw fan character art too?

Surprisingly, I haven’t drawn anyone else’s characters for leisure since I was a teen. (I basically taught myself Disney hand-drawn style by copying images of Ariel and Eric from The Little Mermaid.) Professionally, I’ve worked as an animator for a game company and as an illustrator for a book franchise where I had to draw existing characters on model, so I guess fan art feels more like work than fun for me. The closest thing I have around is a drawing I did while listening to Sean Astin speak, which is more parody than fan art, but maybe your readers will enjoy that anyway.

– Wow! That’s amazing! Also, how cool that you taught yourself to draw by copying images of Ariel and Eric. I’ve seen some incredible art projects you’ve worked on recently, from super cool dragon wine bottles to different mediums of art. What are some of your favorite ways to express yourself through art?

I love to draw epic warriors in pencil, and I’m working on learning watercolor and gouache for some of my “cuter” pieces. The work I do is almost always about the story the piece tells. The clay art you’ve seen lately is a departure from my usual 2-dimensional work. I discovered I love hand building creatures in clay during my freshman year of college, so I occasionally play in that arena when life allows. It certainly helps to get my eyes out of a computer screen occasionally!

– How fun! Plus, you did an amazing job. 🙂 I’m very excited for the rerelease of Divine Summons! The cover is stunning with the dragon! It sounds very intense too (but the good kind *winks*). What’s it been like jumping back into your characters’ lives and your story world?

Returning to the first few books I wrote has been an interesting challenge. It’s a constant battle between wanting to get these books back into circulation ASAP and being tempted to revise, revise, revise until I can’t even tell if I’m improving the book or just making it different. At the same time, I’m also thrilled to get back in touch with Vinyanel and Veranna, the major personalities in The Windrider Saga. I know them so much better now than I did when I started Divine Summons in 2011, so it’s been fun to take the opportunity to round them out a little better.

– I know I am eagerly looking forward to reading it! 😉 I’ve heard on numerous occasions that most authors can’t choose a favorite character, BUT I wonder who you would want to hang out with for a day. Who’s the lucky character to hang out with you? What would you guys do?

For hanging out…hm. I think I’d have to say Culduin from Curse Bearer. He loves life, drinks in the beauty of whatever’s around him, is smart, gentle, but firm. We’d probably go explore some exotic wilderness, climb waterfalls, and find griffon nests. That is, after I got in shape enough to hope to keep up with him! It may seem odd that I’ve chosen a secondary character for this, but my protagonists are just too headstrong—a whole day with either of them would stress me out.

– That sounds wonderful and relaxing! I would love to join in. 😉 Elven cavalry? Elven prophetess? So cool!! Are there any other fantasy creatures who may or may not make an appearance along these super cool elves?

Well, for one thing: dragons. They are probably the one thing I write about almost as much as elves. There are also some cursed lizard men, twisted and thoroughly evil. In a future book, one of the characters I’m most excited about is a mermaid, although her colony lives in subterranean waterways, so she has bioluminescent markings on her face and the tips of her hair.

– Oooo! You have me super intrigued now! Before we go, I have a fun random question for you! If suddenly all the dragons in your story disappeared, how would it affect everyone? How would some of the characters (if they like dragons) try and get them back?

Well, that would put a major dent in Vinyanel’s life, since the silver dragon Majestrin is supposed to be his mount as he takes on the duty of commander of the Windrider battalion. Vinyanel would also lose a major confidante. Also, the female elf Raen from books 2 and 3 of The Windrider Saga would suddenly be out of a job, since she’s taken it upon herself to raise dragon hatchlings that she’s stolen from evil dragon parents.

I’m pretty sure both Vinyanel and Raen would go to the ends of every plane of existence to have their dragon companions back. Such a motivator might even persuade Vinyanel to thoroughly embrace his talent for Thaumaturgy, instead of mostly avoiding the responsibility of serving as a conduit of supernatural power.

– Oh dear! Well definitely no dragons must suddenly disappear then. Thanks so much for chatting with me Rebecca! I had a blast learning more about you story. 🙂

Note: Please know I do not own any of the artwork or picture of the dragon on the wine bottle in this post. All artwork belongs to Rebecca P. Minor and received permission to share her work here. 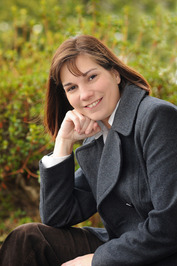 Rebecca P. Minor, can’t help but tell stories, whether that’s in the form of animation, illustration, novels, or really long retellings of weird things that happened when she was a carriage driver. Her favorite stories, however, involve dragons, elves, sword fights, and magic, all of which you’ll find in her two fantasy series, The Windrider Saga and The Risen Age Archive.

You can find her blog, news and updates at http://www.rebeccapminor.com, where she muses on anything from fantasy reading and writing, to making artwork, to the life of mother and wife. Expect pictures of fancy rats in the mix.

Because all of this hasn’t driven her crazy yet, Rebecca is also the conference director of Realm Makers, an annual symposium for people of faith who write science fiction and fantasy. (http://www.RealmMakers.net)

Rebecca resides outside Philadelphia, PA with her husband and three sons, who have all happily bought into the geek pool alongside her.